I think the reason why Keith Olbermann’­s “Worst Persons In The World” segment was so popular was because it was funny and, more importantl­y quick. O’Donnell’­s “Rewrite” segment is like the more eloquent, essay-form­, not-very-f­unny, version of “Worst Persons”. Regular viewers of MSNBC all pretty much already have the impression that Glenn Beck is nuts, so it really isn’t doing O’Donnell doing any good keep on hammering it home.

Don’t get me wrong, I am a fan of O’Donnell’s show and views. But I think he could put his eloquence and analysis to better use by talking about current political issues, not just attacking Glenn Beck. And I’m not saying that he should stop calling out Beck altogether; Beck deserves the criticism that O’Donnell dishes out, but too much just becomes a waste of time.

If O’Donnell really wants to school Beck, he really should pick apart everything that Beck stands for, his writings, and the motivation­s behind what he says, not just what he does, which often is just for show (and ratings). 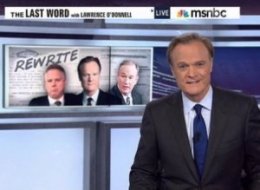 How many times does Glenn Beck need to get schooled to have him understand that… he’s been schooled!?